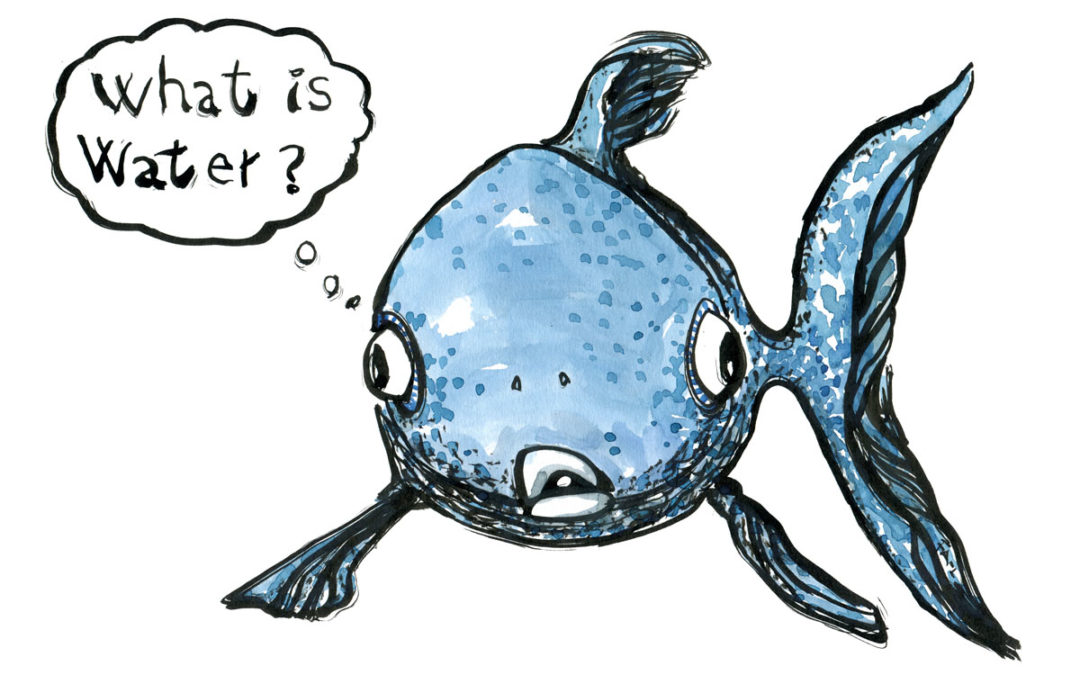 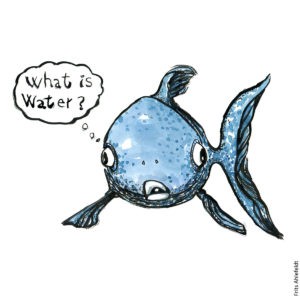 Acclaimed author David Foster Wallace’s essay, This Is Water: Some Thoughts, Delivered on a Significant Occasion, about Living a Compassionate Life, is widely regarded as one of the most famous of its kind. Wallace’s musings on a life well lived opens with a parable involving two young fish who happen to meet an older fish swimming in the opposite direction. The older fish nods at them and says, “Morning, boys. How’s the water?” The young fish swim on for a bit and eventually one of them turns to the other and asks, “What the hell is water?”

This Is Water has been in consistent circulation for over a decade because it touches on issues like the difficulty of empathy, the reality that our thinking is often automatic and the real need to be far more conscious about what is happening around us. In it, Wallace suggests that the value of education is not in the capacity of what we learn, but the ability to consciously choose how to perceive others, think about meaning and act appropriately in everyday life.

Wallace stated, “The point of the fish story is merely that the most obvious, important realities are often the ones that are hardest to see and talk about.” While his speech was initially intended to inspire the individual college graduate, I believe we can take the concept of “what is water” and apply it to organizational culture. The three fish could easily be three co-workers, the more experienced worker says, “We have some cultural issues here,” and the others say, “What are cultural issues?”

We could speculate that the old fish has seen a lot of corporate cultures come and go. We might surmise that his wisdom comes not only from knowing about the water, and recognizing its importance, but also slowing down to inquire how others feel about it, as well. The old fish may know that the water itself really matters and is worth talking about. It’s the water, after all, that’s helping them stay alive.

As for the younger fish, they may not, at this point, know that culture is everything and can be radically different based upon the leader. They may be cynical of leadership, or anyone who asks about “water,” because they believe nothing will change. They may have already experienced too many culture workshops without a true culture commitment. For too many workers their disinterest and distaste for any “water” discussions may be well founded.

Nevertheless, most of us do care about the culture in which we swim. It is a well-articulated culture that meets so many of our emotional needs. It satisfies the need for meaning and purpose, builds a sense of community and a sense of security because we know what is expected of us.

The culture of any company is often what determines success regardless of how well thought out their strategy may be. Why is this? Famed management consultant, Peter Drucker believed that no matter how solid or thorough a company’s strategy might be, if the people executing it don’t embrace the culture necessary for success, the strategy will fail. His one-liner about “culture eats strategy for breakfast” captures this sentiment nicely. Louis V. Gerstner Jr., credited with turning around IBM, claims it was that experience that taught him, “Culture is everything.”

According to the Harvard Business Review, culture is easy to sense but hard to measure, and employee surveys and questionnaires are increasingly unreliable. Measuring culture may be far less important than actively managing culture. Based on our experience, leaders who spend time talking about culture, modeling culture and holding people accountable do far better than those that want to execute another employee engagement survey.

How does a good culture happen? Culture is the domain of senior leadership – and requires them to put a stake in the ground. Leaders need to be able to communicate and demonstrate the values and culture code explicitly and continuously. Done well, the culture will permeate the workplace and be cultivated by the team.

Just like an aquarium, as long as the right fish are introduced and the tank is well cared for, a harmonious environment is achieved. Introduce a betta fish (which may be better called an alpha fish!) to a healthy aquarium and it will eat the other fish and destroy the tank. Culture is something to be actively tended to – leaders who care about culture know the importance of hiring for culture and to quickly exit those that prove unaware of the water.

Experts agree that, “When aligned with strategy and good leadership, strong culture derives positive organizational outcomes.” For leaders, this means articulating cultural standards, behaving consistently with them, overtly recognizing them and not tolerating outliers. For managers it is the day-to-day, filtering what they do through the cultural lens and ensuring that their actions tie back.